Stage 1 is done and dusted. In the table below you will find raw data and few crucial metrics for all finishers. Notice the validation column where Yes with asterics (Yes*) means Spike. Thats when rider has performed above treshold border but still within 4% tolerance. On second occasion he gets UPG notion, which means he is DQ’d from category, but can continue to race in higher category with his time achieved in lower category. For riders who got UPG today, this means they will get links to higher Cat pens and can continue to race there.

Next is Peak20min performance analyses for riders in different categories. The stage was particulary interesting because final climb was 4.8km long with 10.5% average incline. This meant, that riders needed between 18-30min to complete this very steep climb almost entirely without draft. Inclusion of this climb into first stage was important, since its perfect predictor of everyone’s Peak20min ability.

Peak20min for A cat riders was mostly significantly above the border line. These data clearly shows how much stronger or able these riders are then riders in B or C group. For instance, the fastest segment time for Potarje climb in A achieved by Samuel Brännlund from Sweden was less than 18minutes (17:55)! His Peak20min performance recorded during stage was 5.33wkg which means his actual climbing performance was somewhere between 5.4-5.5 w/kg for Potarje climb segment only. Thats some serious ability, so kudo to Samuel. 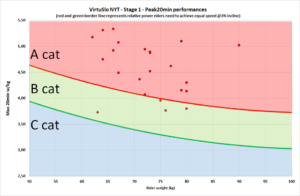 B category chart has 4% tolerance limit line inlcuded. This is one time exeption, where a rider can trespass the border. The fastest B rider on Potarje segment scored 23:20 and his Peak20min power was recorded at 4.10wkg. He managed to fly under the bridge for less than a milimeter, because his Peak20min performance was actualy @103.99%.

Then finaly the chart for C cat. Only one rider managed to trespass into forbiden digital green area. An experienced pall, always complaining about the suffering in fast paced groups on the flats. It was his moment today. Revenge to big boys on +10% climb.

But more interesting is the winner of the C cat. Hildegunn, the only lady in race! And the lightest rider in entire field tho. Now the interesting part. The fact that her Peak20min performance was the highest (excluding the UPG rider) among all C’s. Her climbing time on Potarje segment was 27:22 and her Peak20min performance was measured at 3.57wkg, which is almost tip on the border line. Now take a look at the second heaviest rider in C race, Boštjan. With 98kg he was also tip under the border. Btw. that border line represent the ISO speed curve @3% incline. Riders of different weights, producing the power on that line, should achieve equal speed on 3% incline. Boštjan’s Potarje climb time was 5:22 slower then Hildegunn’s. If these two, would ride with this same relative power on pan flat terain, Hildegunn with 62kg only, would most certainly suffer to hold his wheel. Just check segments time how Boštjan smashed the opposition on that 250m flat Podbrezje Sprint segment. That simply is the result of basic cycling physics. When you put balerina and bull together, she will always dance away on steep slopes, but he will stampede the field on flats. In this perspective, it will be utmost interesting to see and compare performances of these two in stage 4 where ever slightly inclined (+1.5%) Time Trial awaits. 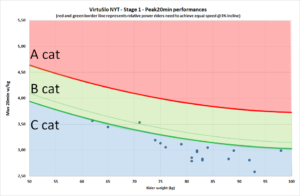