Runda is slowly growing in its popularity, particulary in lower B and C ability group. It provides a bit longer mid week workout then standard RGT event, usually somewhere between 1h20 and 1h40, thus being more attractive for those searching more endurance.  Also, it is becoming very populated by C’s and B’s, because of absence of overly strong riders in category, making races attractive also for them. Finally they can fight for race win among similar riders of their class. If only there wouldn’t be so much sandbagging..

Lets dig into our three races from Maribor City Loop.

We had interesting runda course this week. It consisted of 6 laps on 8.7km loop around town of Maribor. Between 13-15min was needed to cover one loop. First half being slightly undulating uphill out of town, with 350m steep 11% climb, followed by mostly downhill second part. The climb itself needed between 70-90sec for power output range from  5.0 to 6.5wkg. While for the first half (~7-8min) most have to work a bit even in sleepstream due slight uphill (2%), and followed by 1m30 long all-out climb, the second half or some 5min was possible to rest and ride in huge sleepstreem of the blob. A lap, that wasn that hard to manage (keep average power low) for experienced indoor racers.

But let’s look first into race of C ability group: 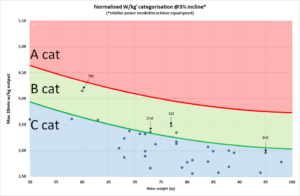 Only 4 riders this week (6 in previous) needed to be DQ’d. Thats good. But boy, o boy, just look into effect of those few obvious sandbaggers. First and second needed to be removed from results. Only the third at finish line was legitimate winner of the day. He was some 15sec down on first rider who powered away on last climb. But OK, the 1st rider was DQ’d, and the 2nd was just a tip over the border which isn’t a crime. Can happen to anyone. What really is not OK, was the presence of 60kg rider who finished 7th. He majorly sandbagged event and has tremendous impact on race of many, who might (without his presence) just survive, for a millimeter, for one last grith of tooth, that one more hill or that litlle slower blob’s pace, They would survive if there wouldn’t be someone too strong splitting the race apart, pulling just few strongest with him. As a very capable B rider, he entered C race and then hammered it out as Runda would be 20min long race and not 1h30. Apparenty he went bonkers (overheated or emptied the tank prematurely) and finished only 7th, despite having Goliaths strenght compared to others, one minute down on winner. That’s pity folks. Please don’t do that. If you are about hard workout, go into ability group of your class.

Similar situation we had in B race:

1st and 3rd went out of the race at the back door, Dq’d. Sorry boys, but you are strong enough for A. Please, if you can’t moderate your power, stay away from B. This means, 2nd and 4th became winner and runner up in race. Identical situation as in C happend here in B, with a super capable sandbagger hammering the race with Peak20min power output high also for A standards. He must have behaved like a young calf who got surprized by new doors on stale. Full force into race, than got sledgehammered with a magnitude to finish 3 and a half minutes down on 1st one over the line. Đi man, go into A next time!!

Runda in A group had their own dynamics, which reminded well on classic Runda as we know them from IRL: 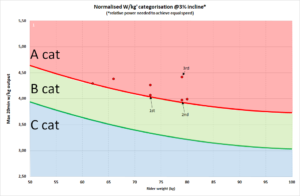 Only 9 of them started the day, with 7 finishers, and 6 of them riding as collective force together until last lap. The race went into full effect only after fifth climb. Most of them contributed to the pace for 40k’s, and despite being only 6 man strong, first group finished still 2min faster then B group with actually similar collective power. Thats the point where take home message for DQ’d guys from B group should come from: don’t be shy, you belong to A group.