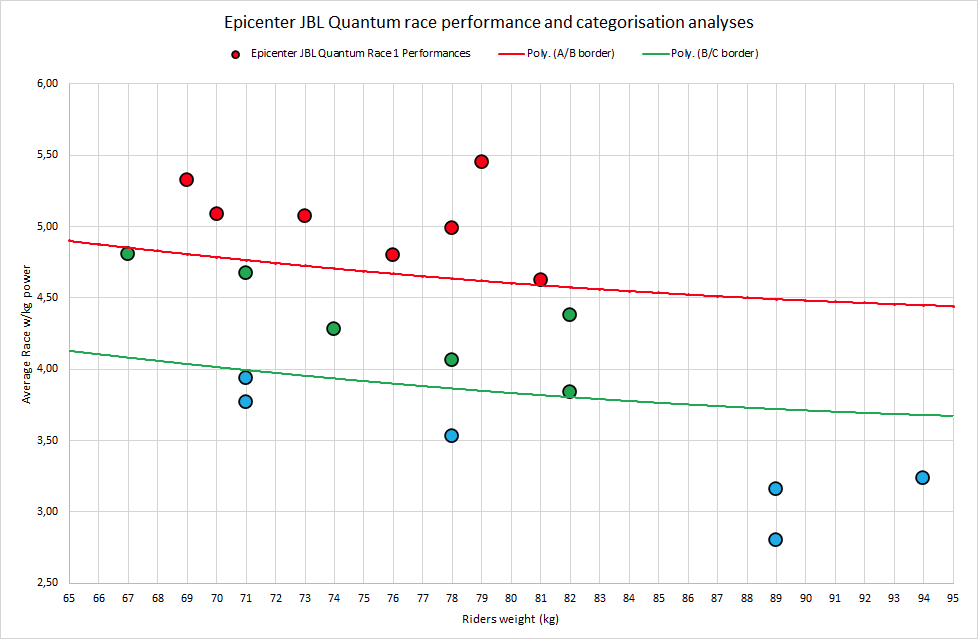 Weekend festival has started with qualifying time trial on a 7.1km long uphill Time Trial with 290 meters of climbing. That’s around 4.0% gradient.

One of the purposes of this racing format, with an aprox. 20min all-out effort, was to test a new categorisaton idea, which should make much more comparable groups in terms of performance and ability, according to very different body shapes. The main problem with simple linear Watt per kilogram (w/kg) categorisation well known from Zwift is, that it’s simply not fair for lighter riders. They have to produce much higher relative power than their heavier competitors, and sometimes, specialy on flater courses they simply can’t compete against them, since the difference is simply to big.

However, calculations of speeds with same relative power, but with different rider weights and gradient shows, that for the same speed, the relation never is linear. Even on a very steep climb with 10% gradient, heavier riders need less w/kg to ride side by side with lighter riders. And on a flat ground, the difference is actually much, much bigger. These relations are graphicaly presented on a chart below. There are three curves. They represent relative power needed for a any given rider from 50kg to 100kg to ride at same speed in comparison to a 70kg rider. As it is obvious, even on 10% gradient with hands on tops, this relation is not linear, and on flat road with hands on drops (normal aero road position) the difference is huge!

And here comes the tricky question. Which curve for what gradient shall we use, to group people into narrower categories, so they will be more fair and make bike races more attractive since very different body shapes will be more realisticaly together according to their actual performance?

Let us thinking. Most traditional bike road races are done on a courses, which vary from pan flat to more hilly or mountaneous terrain. Some might be circular, some from point A to point B, some might be simple uphill races from bottom to the top of the hill. But typical or average road races will ussualy be held on mostly flat ground with various amount of climbing and descending in between. Most of the time of any race is actualy spent on flats, than there comes some climb, and after the climb its ussualy also descend. So, if we would use the upper curve for pan flat terrain with highest speeds to denominate categories, once the road would start climbing, climbers would have big advantage. On the other side, if we would use the curve for 10% gradient equalisation, heavier riders would have big advantage on flats and even more on downhills! So we decide, to use a curve for equalisation at 3% gradient. Anything below 3% will be in favor to heavier riders, anything above 3% will go in favor to lighter riders.

That’s way we specificaly choose a time trial on a hill with very moderate gradient to test our hypothesis. 7.1km long course between Iška vas and Gornji Ig has average gradient of 4.1%. We have hypothesised, that according to speed calculations on 3% gradient, all riders (regardless of their weight) will finish the race with a time that will very closely correlate to the result, which would be observed if we would use formula for 3%:

Off course, K is a constant that moves the curve up and down.

Once all the riders where in finish, we could analyse their raw data and denominate them into three categories. Here are results:

If we loook into race finishing time order and we can easaly spot the difference in weight of riders and their finishing times according to their relative power. Despite racing on a course with 4% average gradient. Heavier riders where still faster at same relative power (w/kg) ouput.

That’s why we choose not to create categories on a linear basis, but use some sort of curve instead. In our case 3% gradient normalized wkg curve nicely denominate riders into three groups, which will fight in narrower groups.

Since, saturday’s races are every thing else but steady riding, it will be interesting to see, how theese riders compare to each other when they use draft, when they sprint and when they will have to unleash their short term anaerobic power. We would expect huge differences, as this is normal also in real life. Sprinters are different animals to time trialist or climbers, and puncheurs are not the same as rolleurs. Thats the fun of real life.